This is a guest post by cq674350529, that the ecos.wtf team translated from Chinese. The original blog post can be found at https://cq674350529.github.io/. cq674350529 remains the copyright owner of the full article content, illustration included.

An editor’s note can be found at the end with our take on this :)

We recently analyzed Zyxel devices and found out that binwalk could not properly extract their firmwares. From binwalk’s output, we gathered that the firmware was actually a single eCos binary blob.

Without knowledge of the load address for that binary, reverse engineering it with any SRE tool will fail given that cross-references cannot be established.

The screenshot below illustrates what happens when you load such a binary in IDA with the right architecture but the wrong load address. We see that functions are not recognized and the whole segment is left in “unexplored” state. This clearly indicates that the load address is incorrect and we need a way to obtain the load address of that firmware.

There’s not much information about eCos firmware analysis online so we were left blind. We therefore devised a method to derive the firmware load address from fixed addresses present in the binary file.

We searched for relevant information and found this article discussing eCos vector initialization. It briefly introduces the eCos interrupt and exception handling procedures initialization. It mentioned 0x80000180 but this address is clearly not the load address either.

We also looked at the linker file for MIPS TX49. It only mentions hal_vsr_table and hal_virtual_vector_table, still no load address.

If you know the exact chip model and version your firmware runs on, it usually is possible to obtain the load address from the corresponding datasheet or manual.

The example below shows the memory mapping for STM32 chips: 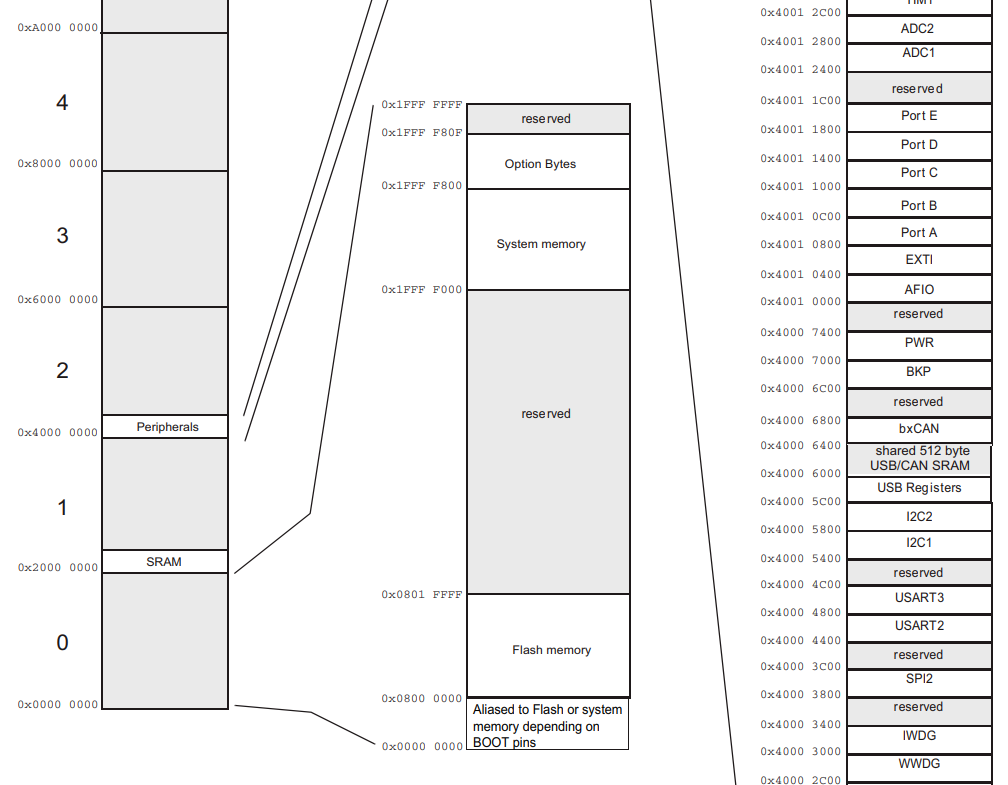 In addition, for some ARM architectures, the load address can also be speculated through the interrupt vector table. The first two items in the interrupt vector table are respectively the Initial SP value and Reset, where Reset is the reset routine address, which will be executed when the device is powered on/reset, and the possible load address can be estimated based on this address. 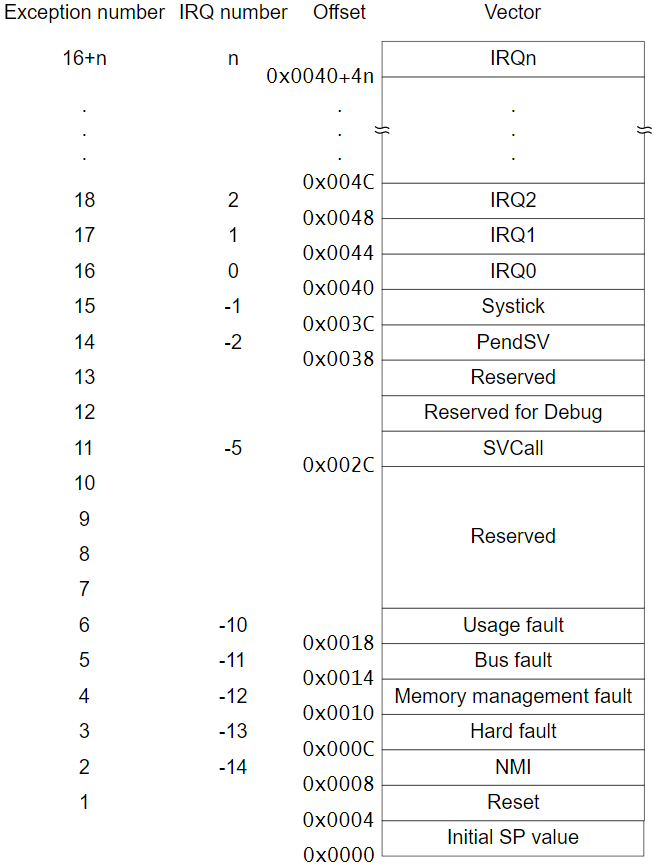 When there is no corresponding chip datasheet or sdk manuals, you can try to start from the firmware itself and infer the possible load addresses by analyzing some features in the firmware.

For example, Magpie does this by identifying the ARM entry table in the firmware, and then guessing the possible load base address based on the addresses in the function entry table.

Another method we saw in this piece tries to find fixed addresses within the firmware and derive the load address from it.

By searching for the “eCos kernel exception handler” string within binwalk source code, we identified the corresponding magic. The matching section is reproduced below.

We then checked if we could find the matched section within the firmware with IDA. We loaded the file with the architecture set to MIPSLE and a load address of 0x80000000.

We then click on Make Code and saw the familiar eCos kernel exception handler with the 0x80000200 fixed address.

Because the firmware file is a bit large (approximately 10MB), it takes a lot of effort to guess the load address based on a single address:

Therefore, it is necessary to find more fixed addresses and more regular addresses to determine the range of the load address.

Using Hex View I quickly browsed through the firmware and found some regular content, as seen below. Among them, there are some continuous content (in units of 4 bytes), the last 2 bytes of which are the same. Opening up the same sections with IDA View, we see these address either points to code function prologues (for jump instructions) or strings (for string cross-reference). Since the load address is incorrect at this time, the string reference is strange.

According to the above rules, all fixed addresses can be extracted from the firmware file. This method helps reducing the potential range of load addresses, and once we got a candidate, we can determine whether it is correct by verifying cross-references soundness.

Magpie determines whether the load address is correct according to whether the code fragment address reference is a function’s prologue. Since there are many different instructions set possibilities for a function prologue, we preferred to rely on a simpler method: judge whether a string cross-reference is correct.

For this eCos firmware, the method to determine its load address is as follows:

(1) Using 4 bytes as the unit, judge whether the low/high 2 bytes of the adjacent content are the same, and extract all fixed addresses in the firmware that conforms to this rule. Taking endianness into account, it is judged whether the content in the adjacent light blue box (or red box) is the same.

(2) Once all fixed addresses have been extracted, we filter out illegal addresses and then sort the remaining ones. The first address in the sorted result is the upper limit of the load address range. At the same time, the first half of the sorted result is the address pointing to the code fragment, and the second half is the address pointing to the string. Choose an address from it, and separate the address that points to the string from the address that points to the code. After that, a certain number of addresses are randomly selected from the string address list as the basis for subsequent checks.

(3) We cycle through the derived load addresses range. For each load address candidate, we judge whether the string pointed to by each string reference address selected before is “correct”. The load address with the most “hits” corresponding to the string address is most likely the actual load address.

A technique to check if a string cross-reference is right is to verify that it points to the beginning of a string. One trick to verify that is to check if the previous byte is ‘\x00’, indicating the end of the previous string. Of course, there’s some string reference addresses that point to the middle of a complete string (“string multiplexing”), but most of the addresses still points to the beginning of the complete string.

According to the above ideas, it is inferred that the eCos loading address of the firmware is 0x80040000.

Once we set the correct load address in IDA, the VSR initialization code is found at the beginning of the binary:

According to the code features mentioned above, we can define a binwalk matching rule that will output those values when scanning an eCos firmware file.

We sent a pull request to binwalk with our new matching rules for eCos.

Even when we set the correct architecture and load address, IDA would not automatically analyze the binary. In contrast, Ghidra immediately analyzed it and successfully identified the functions and established strings cross-references. To execute analysis with IDA, you need to manually click on ‘Make Code’. To make analysis automatic with IDA, one would need to write an eCos loader plugin.

eCos firmware files do not have import/export tables or debug symbols so it is impossible to distinguish common system functions, such as memcpy(), strcpy(), etc. However, we found out that Zyxel firmwares are quite verbose and usually contains debug logs indicating the currently called function. We can take advantage of it to manually rename functions.

The common function calling conventions for MIPS32 is the O32 ABI: $a0-$a3 registers are used for function parameter transfer, redundant parameters are passed through the stack, and the return value is stored in the $v0-$v1 registers.

The tested eCos firmware follows the N32 ABI. The biggest difference is that the $a0-$a7 registers are used for function parameter transfer (corresponding in O32 ABI to $a0-$a3, $t0-$t3).

IDA supports changing the ABI mode in the processor options, but only modifying this parameter does not seem to work. To make it work, you also need to set the compiler and its ABI name. 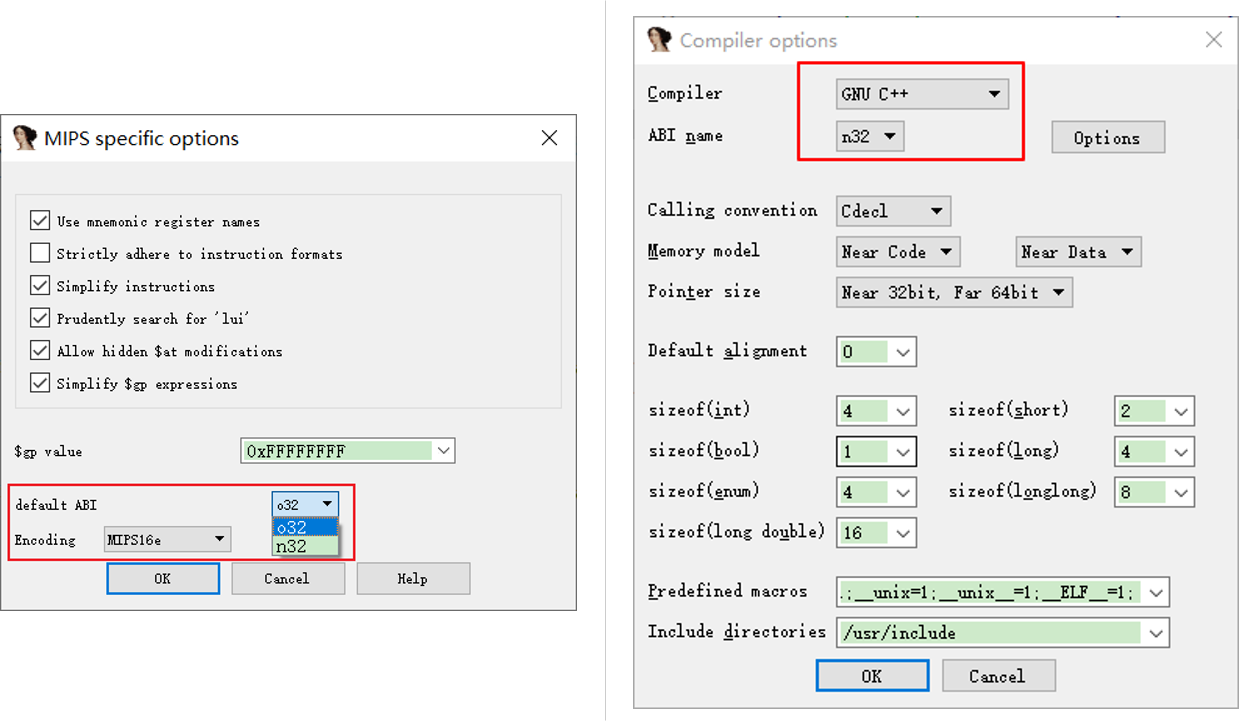 Over the course of this article we went over different methodologies used to identify load addresses of raw binary firmwares. We devised a way to find the load address of an eCos firmware file from Zyxel, wrote a proof-of-concept and demonstrated that it works.

As a byproduct, we also enhanced binwalk pattern matching capabilities for eCos and documented how to properly load these firmware images in IDA and Ghidra.

While bruteforcing load address range and validating load address candidates by checking cross-references to strings or function prologues is not a new idea (see rbasefind, basefind.py, and basefind.cpp), the article is interesting in that we can observe cq674350529 thought process when trying to find a way to rapidly find the Zyxel firmware load address.

They made two additions to eCos research: better binwalk matching rules, and identifying the right calling convention for eCos on MIPS (I described this calling convention in Broadcom eCos Reversing the OS Memory Layout, but didn’t know at the time it was the N32 ABI).

For those interested in the subject, here is how basefind works against the Zyxel firmware:

While translating this piece, all I could think about was that there must be an even easier way to derive the load address using either the content of interrupt and exception handlers, or their relative offsets. We cannot rely on the reset function given that it simply jumps to the MIPS reset vector at 0xbfc00000, and while addresses of initialization functions such as hal_if_init are static accross firmwares of the same brand/constructor (e.g. Broadcom eCos), they’re clearly not when you start comparing vendors. This means we cannot derive the load address by simply looking at known functions offsets.

For the time being, the bruteforce technique is the way to go if you don’t know your eCos firmware load address.